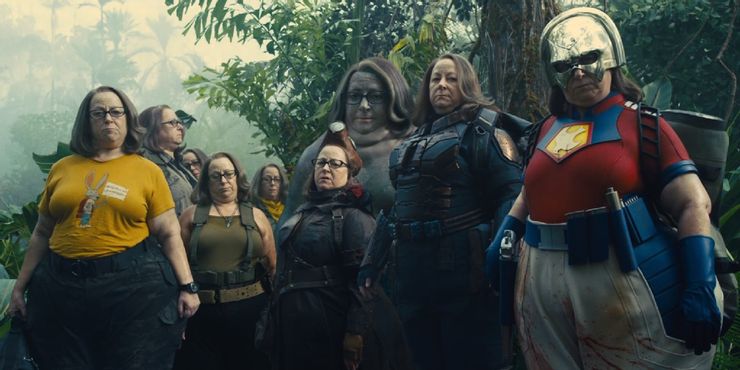 The latest “Suicide Squad” movie may not be a cinematic masterpiece, but when held up in comparison to the 2016 version of this material, it certainly feels like great filmmaking. Credit much of the reboot success to director James Gunn, who find the right mix of anarchy and fun to leave audiences wanting more.

For those of you who have tried to wipe the last film from your memories, the central conceit of “The Suicide Squad” is that comic book bad guys will be given the chance to knock some time of their prison sentences if they will agree to go on a seemingly-impossible mission for the government.

That how we get the chirpy-but-lethal villainess, Harley Quinn (Margot Robbie) teaming up with the guy who put superman in the ICU (Idris Elba), and an anthropomorphic shark known as King Shark (Sylvester Stallone). Rounding out the team is a Captain America imitator (John Cena), a woman who can control rats (Daniela Melchior) and a man who grows killer polka dots (David Dastmalchian) and spends all of his time fretting about his mother.

Yes, this is an odd assortment of characters to be sure.

They are odd, but always fun to watch as they are sent out to invade a fictional South American country and stop a plot to bring down America via a giant intergalactic monster. I won’t spoil its full identity, but as is appropriate to this film, the big bad is also an odd choice.

As you might expect from this very R rated blockbuster, this movie is very gory and filled with profanities. In lesser hands this might be a critique, but not so with a director who adds artistic flourishes to every bit of bloodletting. This makes “The Suicide Squad” into a surprisingly good-looking film, even while it occasionally shocks your senses.

The same holds true for the excessive profanity, which is delivered with gleeful relish by this odd assortment of antiheroes. These actors are having a blast playing these bad guys, and while I’d never want to go on a mission with them, I’d certainly love to watch future adventures from the safety of an air-conditioned movie theater or at home on HBO Max.

Kudos to the cast and crew for making “The Suicide Squad” into one of the most entertaining DC Comics movies since their “Batman” series, and this one is certainly a lot more fun to watch. It’s a silly comic book movie mixed up with a war flick, a workplace comedy, a dysfunctional comedy and a whole lot of anarchic fun.