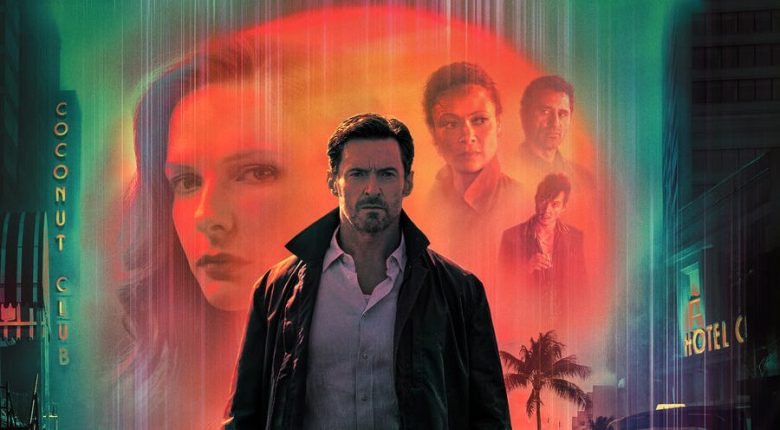 “Reminiscence is a water-logged mess of a movie.

“Reminiscence” is a swing and a miss of a movie. It’s a visually impressive dystopian mystery/film noir/love story that struggles to make the movie’s disparate elements mesh together.

Still, the filmmakers deserve credit for taking such a big swing. At least they are trying to make something original.

Hugh Jackman stars as a near-future detective working the wet streets of Miami because rising ocean levels have flooded the city. He runs a business where he uses a science fiction contraption that helps people relive lost or hidden memories. This is useful when law enforcement needs to compel a confession from a criminal, but also when a mysterious woman (Rebecca Ferguson) wanders in one evening and asks for help in finding her lost keys.

The detective falls in love with the woman at first sight, much to the dismay of his partner (Thandiwe Newton) who is obviously crushing on her boss. He almost seems happy, but then the lost-keys woman mysteriously vanishes, and the detective becomes obsessed with finding out what happened to her. As you might predict, he will uncover dangerous secrets during his investigation

It’s not the most complicated mystery, and writer/director Lisa Joy goes over each clue multiple times for those who are having trouble keeping up with the plot. For a film that seems to aspire to being a “Chinatown” meets “Blade Runner” type of a movie, the screenplay is far too simple for such lofty aspirations.

Jackman’s performance also seems a little off. The actor is usually a charismatic figure who can light up the screen. This time out, however, he is content playing a sad little man who keeps putting himself in danger while he searches for his lost love. It’s not hard to surmise that his missing girlfriend is a femme fatale who’s moved on. His desperate search comes across as a little sad, and since we didn’t spend enough time watching the romance blossom, it isn’t very convincing either.

Story issues aside, I do think that the visuals are quite impressive, creating this fully believable, water-logged world. The whole city seems to be on the verge of falling into the sea, giving the film a nice metaphor for its human characters as well.

Joy, who is a co-producer of HBO’s “Westworld,” deserves a lot of credit for her world building and production design skills. It’s easily the best part of the film.

The problem is that while “Reminiscence” has many good elements, they don’t mesh into one artistic whole. Pretty images can only take you so far when you’re stuck watching a character slog through his sad investigation. We will hope for better things from Joy in the future, but right now, “Reminiscence” is a water-logged mess of a movie.

“Reminiscence is playing in theaters and streaming on HBO Max.